Add to Lightbox
Rudolf Hren was killed in 1995, though it wasn’t until 2010 that his body was found and exhumed from a mass grave in the Bosnian countryside. Hren was one of about 8,000 people, almost all of them men and boys, slaughtered over several days that July by Bosnian Serbs around Srebrenica, the worst atrocity in Europe since World War II. Except for four Catholics, all those killed were Muslim, and most of the dead are now buried at the Srebrenica-Potočari Memorial and Cemetery, which is nestled in hills that remind me of east Tennessee.

Hren’s is the only Christian (Catholic) grave in the cemetery. He grew up and lived in Srebrenica with his Muslim neighbors. After his body was identified and the decision needed to be made about where to bury him, his mother Barbara said, “He was with them, he died with them. He should rest with them, too.” Hren’s wife Hatidža and daughter Dijana agreed.

I spent several hours in this cemetery over two days. I watched women visit the graves of their husbands. I saw one man wander throughout the cemetery, visiting headstone after headstone and praying at each, hurt still in his eyes. Watching him was heartbreaking, and I assumed that each stop was someone important to him — a friend, a neighbor, a loved one — and that he had spent the last 18 years without them because people, some with crosses tattooed on their arms or chest, had slaughtered them.

And so I was thankful for Rudolf Hren and his family, that by being one of the slaughtered, and by choosing to be buried here, a cross would not just be associated with those who did the killing. It would also be identified with someone who shared in the suffering. 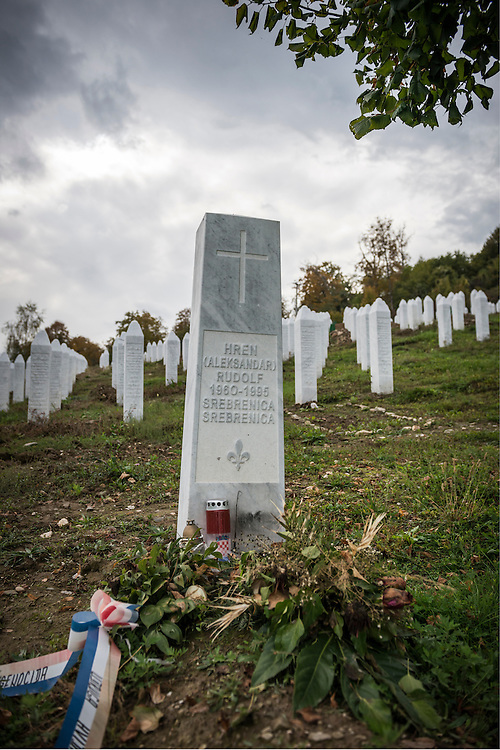