Add to Lightbox
The Nile wasn’t the only thing flowing through central Cairo on February 2, my first full day back in Egypt since finishing a seven-month photography stint in the Middle East the previous November. So were rivulets of blood, dripping down faces and staining shirts and sidewalks. Rocks flowed, too, at times hurtling through the air in barrages so thick the sky seemed half solid. Images of these things flowed onto television sets around the world. This was Tahrir Square, and its anti-government demonstrators were under siege.

The contrast to my first day in Cairo, in 1996 as a Middle East Studies Program (MESP) student, could hardly have been greater. I remember orange juice and croissants on a wooden table in a sunlit classroom and the thrill of beginning a semester in a foreign landscape with 16 other fresh faces from North America, many of whom are still my friends today. We had a staff to guide and look after us, people who taught us not just facts but to care. I valued the program, and it was with pleasure that I returned four years later to work as an intern.

Now, in 2011, I was back in Cairo as a freelance photographer, wanting to capture something of these profoundly historic events. Gone was the stability of the Mubarak regime. The rocks and blood in Tahrir were among the many signs that Egyptian history did not come to a halt with the Pyramids or the Suez Canal; it was still under construction, and ferociously so.

This picture of protestors was taken days later on February 11. The clashes had stopped but the protestors remained in the square demanding the president’s departure. It was the 18th day of protest.

It was also Friday, the day of congregational prayer in Islam. As Muslims prayed in the square, Coptic Christians held hands to form a human chain around them. It was a show of protection and unity — of neighborliness — as those praying turned their attention to God. 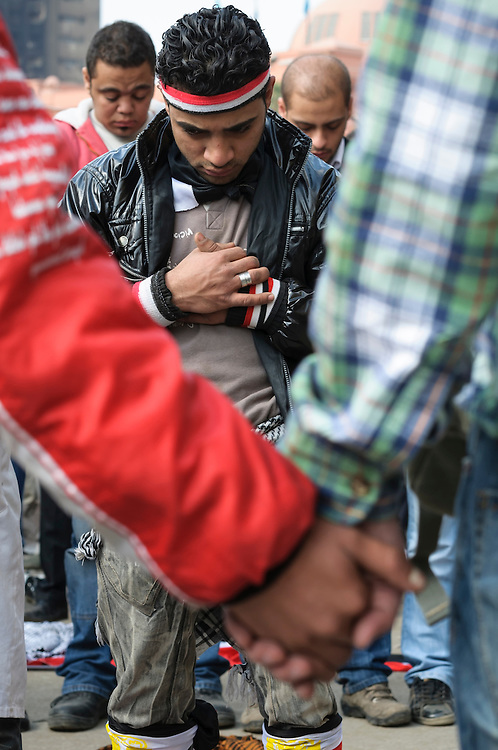