Add to Cart Add to Lightbox
At midday on July 24, I boarded a bus in Muxia to begin a roundabout journey home, and for the first time in almost two months my body would move at more than three miles per hour. My Camino was over, and I was reentering a world in which speed is a defining characteristic.

At the end of the Camino, most pilgrims feel a heightened state of consciousness and sensitivity. There has been a slow accretion of details -- things you've noticed as you walked, as well as things from the past that you had plenty of time to turn over in your head. By possessing only what you could carry in your backpack, you've been minimilized. But by walking, you've also been embodied, for it is your body, not something external, that has moved you across a landscape for weeks on end.

The Camino means different things to different people. It's the shedding of an old layer of skin. It's the renewed focus on where you want to go, and how. It's the rediscovery of one's flesh and blood, and the intricacies of the earth. It's community.

I was fortunate to meet Rachel, who you see in this picture, in the final kilometers of the walk to Muxia the day before. She too had started the journey some 600 hundred miles earlier in Saint-Jean-Pied-de-Port, carrying her joys and sorrows, and now was at the end. Within the week she would be back home, reunited with her children.

This picture was made shortly before I boarded the bus, and it symbolizes much about the Camino, which is to say it speaks to a truth about life itself: It is our body with which we encounter the earth, and with which we make our journey through space and time, until death brings it to an end. The rock in this picture will remain a century from now, Rachel's body won't. But her body -- and our bodies -- are here now. And unlike rock, our bodies touch, taste, see, hear, and smell.

May we all take journeys that lay us bare, and bring us to our senses. 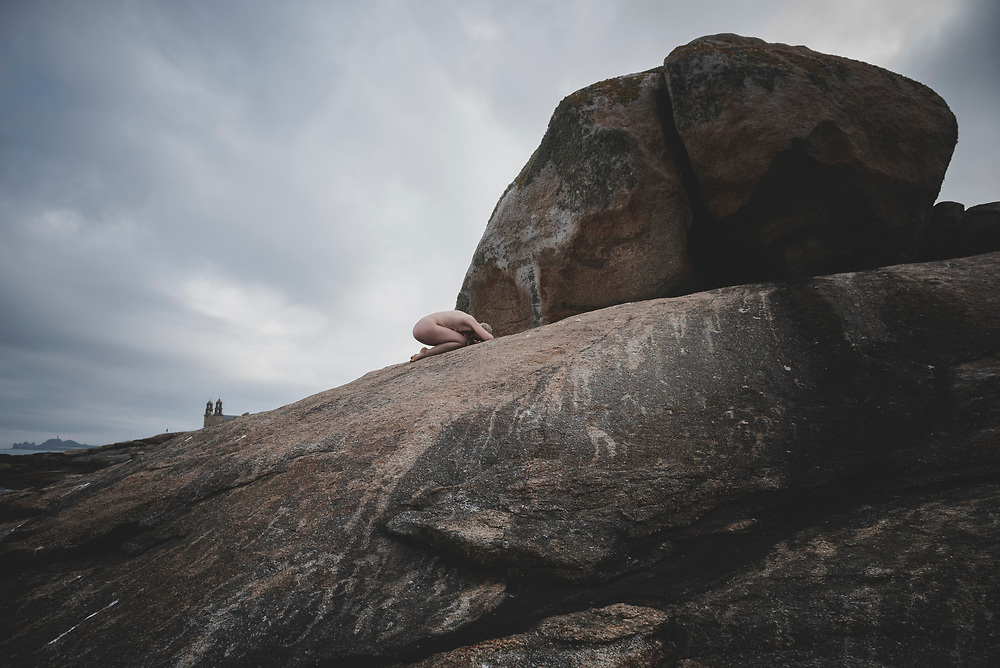